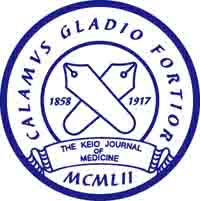 [Advanced Published online The Keio Journal of Medicine, by J-STAGE]
<Title:> Cutaneous Metaplastic Synovial Cyst: Case Report and Literature Review from the Dermatological Point of View
<Author(s):> Masahiro Fukuyama, Yohei Sato, Jun Hayakawa, Manabu Ohyama
<Abstract:> Cutaneous metaplastic synovial cyst (CMSC) is a rare tumor typically representing a solitary, well-circumscribed and cystic mass, which is not connected to the joint. Synovial cysts have been predominantly reported by orthopedists or pathologists and the presence of CMSC has not been well recognized by dermatologists. Herein, we reported CMSC developing in a 68-year-old woman receiving systemic corticosteroid for the treatment of eosinophilic granulomatosis with polyangitis and attempt to delineate clinical characteristics of this unusual neoplasm by reviewing the literature, especially focusing on dermatological descriptions. In histology, the cystic wall was lined by the layers of flattened synovial cell-like cells and connective tissues, mimicking the synovial membrane. Positive immunoreactivity of the lining cells against vimentin was detected, but not for cytokeratin, CEA, CD68 and S-100 were detected. The pathogenesis of CMSC remains unclear, but has been tightly linked to direct traumatic stimuli or relative tissue fragility, which potentially accounts for CMSC development in our case. Most CMSCs reported by dermatologists located on the extremities, while those described by other specialists tended to distribute more globally. Preoperative diagnoses were either epidermal cyst or suture/foreign body granuloma. Incomplete surgical excision of usual synovial cyst may lead to local recurrence, which has been reported in oral and maxillofacial surgery, but not in dermatology. This could be explained by technical difficulty of surgical excision due to anatomical location. Dermatologists need to be aware of CMSC, which needs to be included as differential diagnosis of subcutaneous cyst.
<Keywords:> cutaneous metaplastic synovial cyst, dermatology, eosinophilic granulomatosis with polyangitis, corticosteroid, vimentin
<URL:> https://www.jstage.jst.go.jp/article/kjm/advpub/0/advpub_2016-0002-CR/_article

A Theory of Diagnostic Testing to Stop the Virus Spreading: Evidence-based Reasoning to Resolve the COVID-19 Crisis by Testing [Published online in advanced , by J-STAGE]

<Title:> A Theory of Diagnostic Testing to Sto...